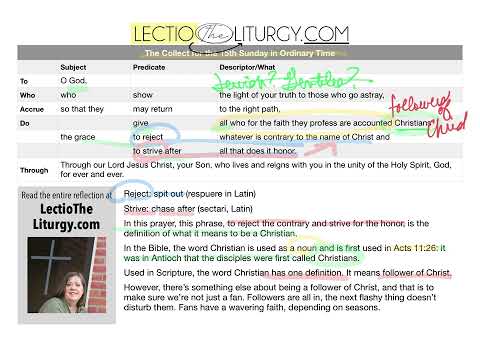 Thank you for joining me as we Lectio the Liturgy with the Collect for the 15th Sunday of Ordinary Time.

O God, who show the light of your truth to those who go astray, so that they may return to the right path, give all, who for the faith they profess are accounted Christians, the grace to reject whatever is contrary to the name of Christ and to strive after all that does it honor. Through our Lord Jesus Christ, your Son, who lives and reigns with you in the unity of the Holy Spirit, God, for ever and ever.

There are two things I love about the Collect this week. The first is that we have a definition of what it means to be a Christian, and the second thing is if we get off track, we have a way back. <br> Let’s look first at what we’re asking for the grace to accomplish. We ask that we reject whatever is contrary to the name of Christ and to strive after all that does it honor.

In this prayer, this phrase, to reject the contrary and strive for the honor, is the definition of what it means to be a Christian.

In the Bible, the word Christian is used as a noun and is first used in Acts 11:26: For a whole year they met with the church and taught a large number of people, and it was in Antioch that the disciples were first called Christians.

Used in Scripture, the word Christian has one definition. It means follower of Christ. The prayer changed for me when I put the definition in the prayer in place of the word “Christian”: who for the faith they profess are accounted followers of Christ…

Fans of Christ have faith, but a faith that wavers or fluctuates depending on the season. A fan may even feel that they’ve got it all together, but the thought of surrendering it all to God is frightening.

Followers are intentional, they choose to be a follower. Followers are all-in, they have surrendered fully to God, they want to mirror Christ and the next flashy thing that comes along doesn’t affect their faith. A question I’ve asked myself often times this week is how does the faith I profess, not only in words, but also in what I do, let others know that I’m a follower of Christ and not just a fan?

We can try all for all we’re worth, but will there be times that we are going to fail? You know it, but God thought of that, too. In Jesus we have the light of truth. Light and truth are things that are always constant. Light is always light and truth is always truth. To see the light of truth means that we may need to adjust our thoughts and desires and realign them back to God’s. It may cost us some pride, but it’s worth it.

Thanks for praying with me.
Julie