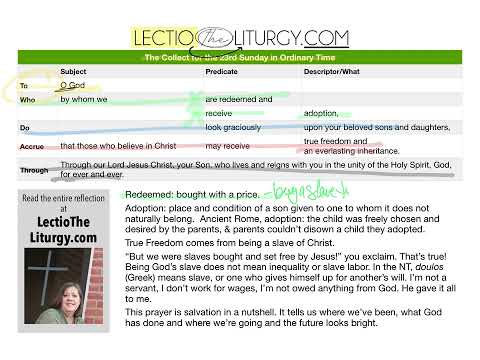 When I began studying Collects, I noticed that there are five parts to the prayer. Not all of the prayers have all five parts, but we do find them in this one.

Who: by whom we are redeemed and receive adoption,

Do: look graciously upon your beloved sons and daughters,

Accrue: that those who believe in Christ may receive true freedom and an everlasting inheritance.

Through: Through our Lord Jesus Christ, your Son, who lives and reigns with you in the unity of the Holy Spirit, God, for ever and ever.

The To of the prayer is “O God.” Although I say it often, I’d never really thought about “O” as a word, but Dictionary.com tells us that “O” used before a name in a direct address lends earnestness to an appeal. We may hear ourselves say, “O dear” which sounds like it has more meaning than just “dear.” When God said to the Israelites, “Hear, O Israel!” it was almost like he was using their first and middle name to get their attention. Today, we plead, addressing him as, “O God.”

The Who, which usually is a description of God, has two-parts in this prayer, reminding God of what he has done for us. By him, we have been redeemed and receive adoption. Redeemed is one of my favorite verbs. It is defined as bought with a price. Vine’s Dictionary notes that redeemed can also mean to buy a slave with the intent to set him free.

We weren’t just set free, we are adopted. In this adoption process, the bonds are the same as if we were born in this family and the bonds are never broken. In ancient Rome, when you adopted someone into your own family, it was forever. This new child was freely chosen. You could give up your own child, but you could not disown a child you adopted.

What we are asking God to Do is to graciously look upon us, the recipients of the work of his mercy. Can you visualize that? God looking upon you, pouring his love and mercy on you. Just receive, because there is more.

In our prayer, what we are asking to gain, what I call the Accrue, is that we receive true freedom and inheritance. While both of those are simple, what has been on my mind this week is the question of what makes true freedom different than regular freedom.

Freedom doesn’t mean we can do whatever we want when we want. We can’t go the wrong way on a one way street, we can’t drive whatever speed we want. Freedom can be defined as the the ability to choose the right things, or as absence of constraints.

“But we were slaves bought and set free by Jesus!” you exclaim. That’s true! However, to be God’s slave does not mean inequality or slave labor. In the New Testament, doulos (Greek) means slave, or one who gives himself up for another’s will. I’m not a servant, I don’t work for wages, I’m not owed anything from God. He gave it all to me. He set me free so I could have freedom (Gal 5:1).

If we truly understood the price that he paid, the only worthy response is to give ourselves back to him, to offer ourselves for his will. What we will find in Him is freedom, freedom from sin, freedom from bondage, freedom from our wounds of the past. True freedom is only given when you have been purchased by the blood of Jesus. True freedom allows us to be who God created us to be.

When we belong to God’s family, the Father makes us an heir. When God divides his Kingdom among his heirs, he doesn’t just give Jesus the best and split the rest. We get what Jesus gets. We get it all.

This prayer is salvation in a nutshell. It tells us where we’ve been, what God has done and where we’re going and the future looks bright.