Almighty and merciful God, may no earthly undertaking hinder those who set out in haste to meet your Son, but may our learning of heavenly wisdom gain us admittance to his company. Who lives and reigns with you in the unity of the Holy Spirit, one God, for ever and ever.

My first reading through this prayer, brought up three questions:
1) what are the early undertakings and
2) how do I increase in learning of heavenly wisdom? Heavenly wisdom gains us admittance to Jesus’s company and I want that, but
3) do I have to wait until I’m dead?

I studied the Latin prayer, and it turns out that earthly undertakings are just that. The Latin form of this prayer uses the word “opera” for “undertaking.” Among it’s definitions are: work, labor, a deed, action, achievement or effect. The key here isn’t that it’s a thing as much as it’s an earthly thing, and not a heavenly thing. We all know that earthly things won’t help us grow in holiness because they’re worldly things, not things of God.

Heavenly wisdom is what it is, as well. The Latin words used here are that we discern heavenly instruction. How do we do that?

Since you’re already reading/listening to my posts, you've already started! However, I have found that some people have never been told, and some don’t want to hear, that there’s more to living our faith than showing up for Mass once a week. Our relationship with Jesus should be lived 24/7. Suggestions to grow in faith might include studying Scripture, spending time in prayer or at Adoration. Read good, solid Catholic things. Have you read the Catechism? It’s actually pretty interesting. And let’s not forget about studying the Saints.

As far as being admitted to God’s company, I don’t have to wait until I’m dead, it starts now. The word company (consortes) means to be a co-heir, of the same fortune, a brother or sister. If I wait until I’ve passed away, it’s too late for me to gain heavenly wisdom.

A really important word in the prayer has only three letters. It is the conjunction “but.” The word "but," used after a negative clause introduces a direct opposite or the climax. We can’t have both/and, it’s one or the other.

Having earthly undertakings hinder us is the opposite of learning of heavenly wisdom. Only one of those options makes us co-heirs with Jesus. What will you choose?

Thank you for praying with me,
Julie

Lectio the Liturgy: Ask the Holy Spirit to show you what’s tripping you up on your path to holiness, then listen. What one habit can you start now to gain heavenly wisdom? 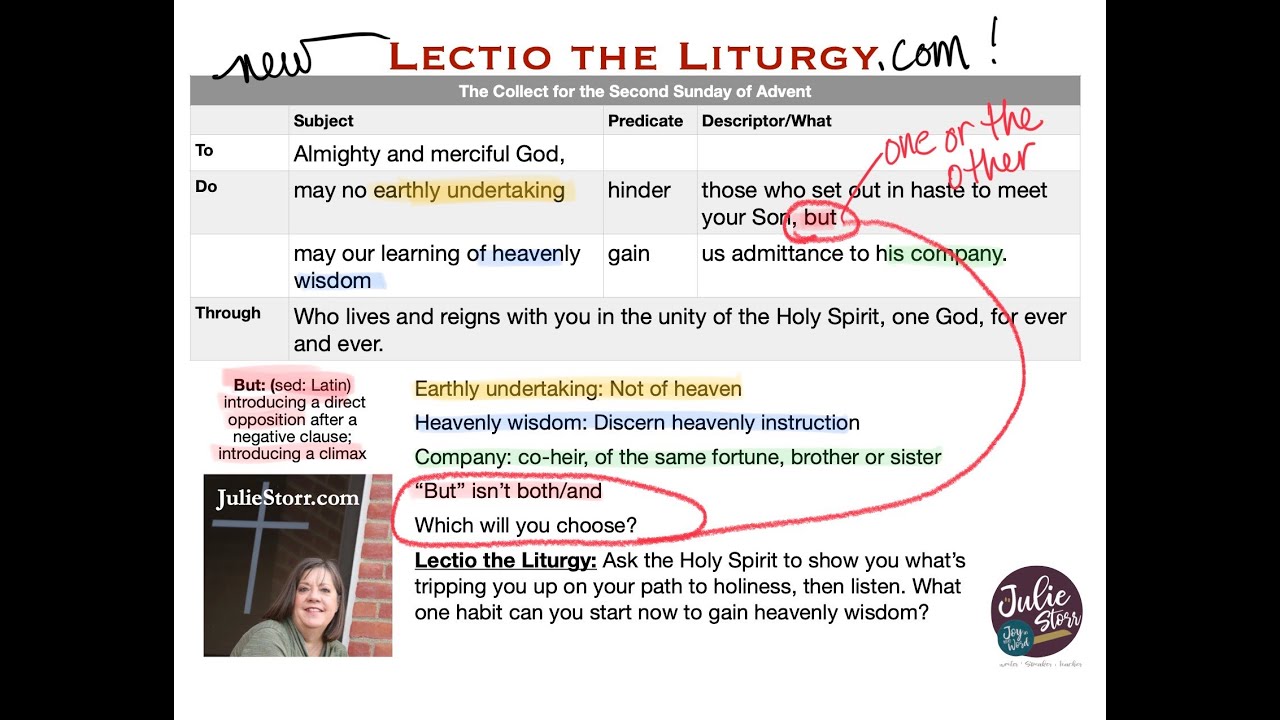