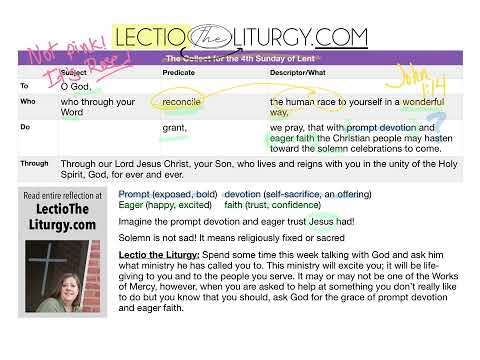 This weekend we celebrate the 4th Sunday of Lent. It is Laetare Sunday. Laetare is Latin for rejoice. If you attend a Latin mass, or the introduction of the mass in your parish is prayed in Latin, the first word you will hear is laetare. It is found in Isiah 66:10: “Rejoice, Jerusalem, and all who love her.” Even the liturgical color lightens up a bit for this Sunday as the penitential purple is changed to rose.

The Collect this week reads:

O God, who through your Word reconcile the human race to yourself in a wonderful way, grant, we pray, that with prompt devotion and eager faith the Christian people may hasten toward the solemn celebrations to come. Through our Lord Jesus Christ, your Son, who lives and reigns with you in the unity of the Holy Spirit, God, for ever and ever.

The who clause this week is phrased in a way we don’t often think about, God reconciled us to himself in a wonderful way. During Lent, a “wonderful way” doesn’t sound like a good way to describe the events of Holy Week.

This wonderful way is found in John 1:14, “And the Word became flesh and made his dwelling among us.” We may not be thinking about the birth of Jesus during Lent. However, as I reflected on this phrase of the Collect, the birth of Jesus was every bit a part of God’s plan as was his death.

It’s easy, during Lent, to be focused on the sorrow to come, but this week I imagined the people who knew Jesus, the ones he grew up with, the ones he ministered to and with. I thought about John, Mary, Martha and Lazarus. I thought about Mary Magdalene and the Apostles. They all probably enjoyed every minute they got to spend with Jesus, not knowing that because of his love for them, he would be taking on each and every one of their sins, he was going to die for them, to reconcile them to God so that they would be with him forever.

They didn’t have a celebration of life in ancient times. However, if they did, they would have had some amazing life to celebrate! They knew Jesus’ life before his death and they knew him after his resurrection and the life after his death. They could also celebrate the everlasting life that he came to bring them. All of those are a part of the plan that God had to reconcile us to himself.

One thing that’s implied in this phrase is the fact that we sin and need reconciliation with God. God, in his love for us, chose a most wonderful way to bring us back to him - he gave us his son. God’s Word became flesh.

Words don’t always mean what I think they do. From the Latin translation of the prayer, prompt can mean quick, but it also means exposed and bold. Devotion is a self-sacrifice, an offering. Eager faith is a faith that is happy or excited.

For an example of prompt devotion and eager faith, I had to look no farther than Jesus. The best example I can find of prompt devotion, as defined above, is to look at the life and sacrifice of Jesus. He is God. His crucifixion, his self-sacrifice, was such a public, selfless and bold move

Jesus is also the example of an eager faith. He never dragged his feet when it came to his Father’s ministry. I can almost feel his delight at showing the disciples how he could feed the thousands from a few fish and loaves. His heart was overjoyed when Lazarus came out of the tomb. He never complained about the walk to the next town, his steps were probably lively and light, just anticipating what the Father had in store for him next.

Living in prompt devotion and eager faith is a wonderful state to be in as we look ahead to the solemn celebrations. Solemn doesn’t mean that the celebrations are sad. In the Latin translation, solemn is defined as annual, religiously fixed, or sacred. We now look forward to the Solemnity of Easter!

Lectio the Liturgy: Spend some time this week talking with God and ask him what ministry he has called you to. This ministry will excite you, it will be life-giving to you and to the people you serve. It may or may not be one of the Works of Mercy, but when you are asked to help at something you don’t really like to do but you know that you should, ask God for the grace of prompt devotion and eager faith.

Thanks for praying with me!