Collect for the 4th Sunday in Advent

Pour forth, we beseech you, O Lord, your grace into our hearts, that we, to whom the Incarnation of Christ your Son was made known by the message of an Angel, may by his Passion and Cross be brought to the glory of his Resurrection. Who lives and reigns with you in the unity of the Holy Spirit, one God, for ever and ever. 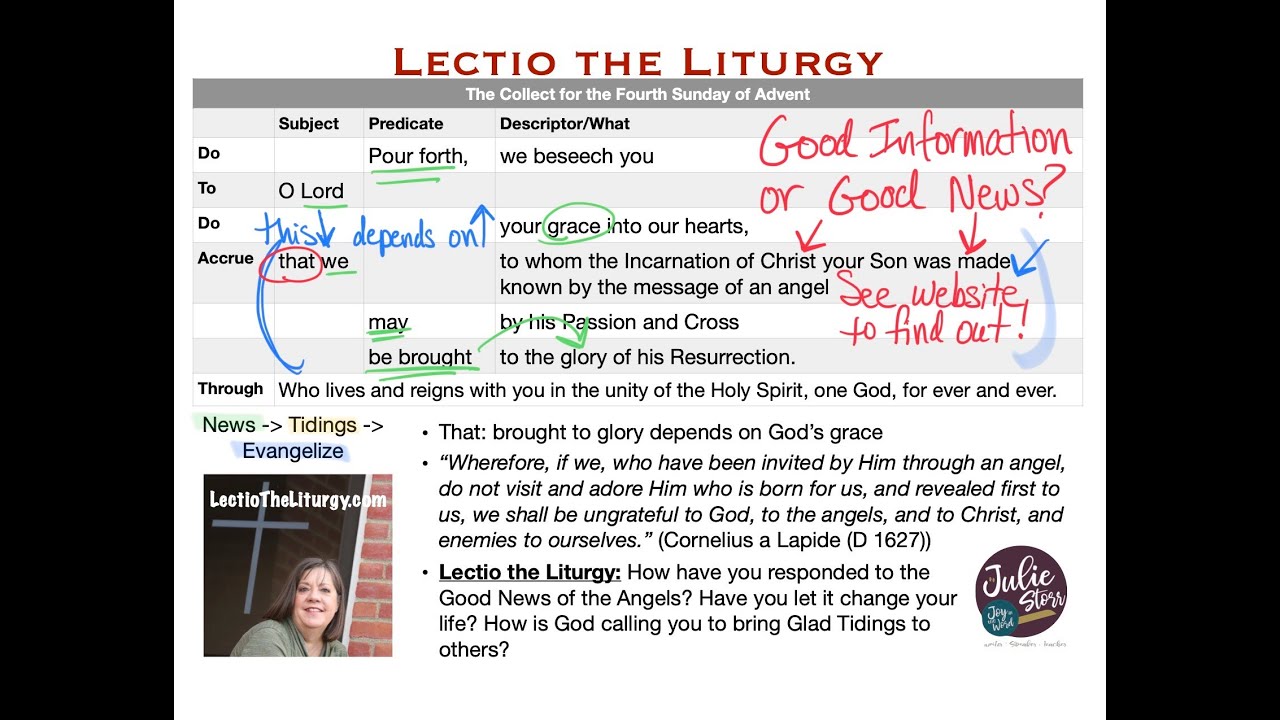 There’s one little thing, and one big thing in the prayer this week. First the little thing: the conjunction “that.” The first part of the prayer is independent, it can stand alone. However the second part, the “that” and what comes after it, is dependent on the first part. In this case, we ask that we may be brought to the glory of the Resurrection, but we can’t do that without God’s grace.

Here’s the big thing: why is the Incarnation being made known to the angels mentioned in this prayer? I thought about this for a long time, and as often happens, I wake up at 3 am and everything falls into place.

In this weekend’s gospel from Luke 1, the Annunciation, the Archangel Gabriel goes to Mary with the news that she would be the mother of the Son of God. In Luke chapter 2, the angels announce the birth of Jesus to the shepherds. Note that in both instances, the angels did not bring good information, they brought good news. What do I mean?

Mary’s response is “yes,” and Scripture tells that she soon goes to the home of Elizabeth, as Elizabeth is expecting a child, as well. When the angels left the shepherds, they did not say, “well, that was fun,” and go on with their work. They responded by going “in haste” to the manger.

But there’s more to the meaning of news. In Luke 2:10, we read that the angels brought “good tidings.” In English, we translate tidings to “news.”

To take “tidings” one step deeper, in Greek and Latin, “tidings” comes from the word “evangelize” (εὐαγγελίζομαι). We’ve heard the word evangelize a lot in recent years, but have you considered that the angels could be the original evangelizers? They brought the Good News of the the Savior to Mary, the shepherds, and to Joseph.

When we hear the angel’s message of the Good News of Jesus, we are called to respond, as well. When we have an encounter with Jesus, our lives should be changed, like Mary, and the Shepherds, and we, too, are called to evangelize, to bring Good Tidings to the world.&nbsp;<br>In fact, “Wherefore, if we, who have been invited by Him through an angel, do not visit and adore Him who is born for us, and revealed first to us, we shall be ungrateful to God, to the angels, and to Christ, and enemies to ourselves.” (Cornelius a Lapide  (D 1627))

Lectio the Liturgy: How have you responded to the Good News of the Angels? Have you let it change your life? How is God calling you to bring Glad Tidings to others?