Collect for the Epiphany of Our Lord 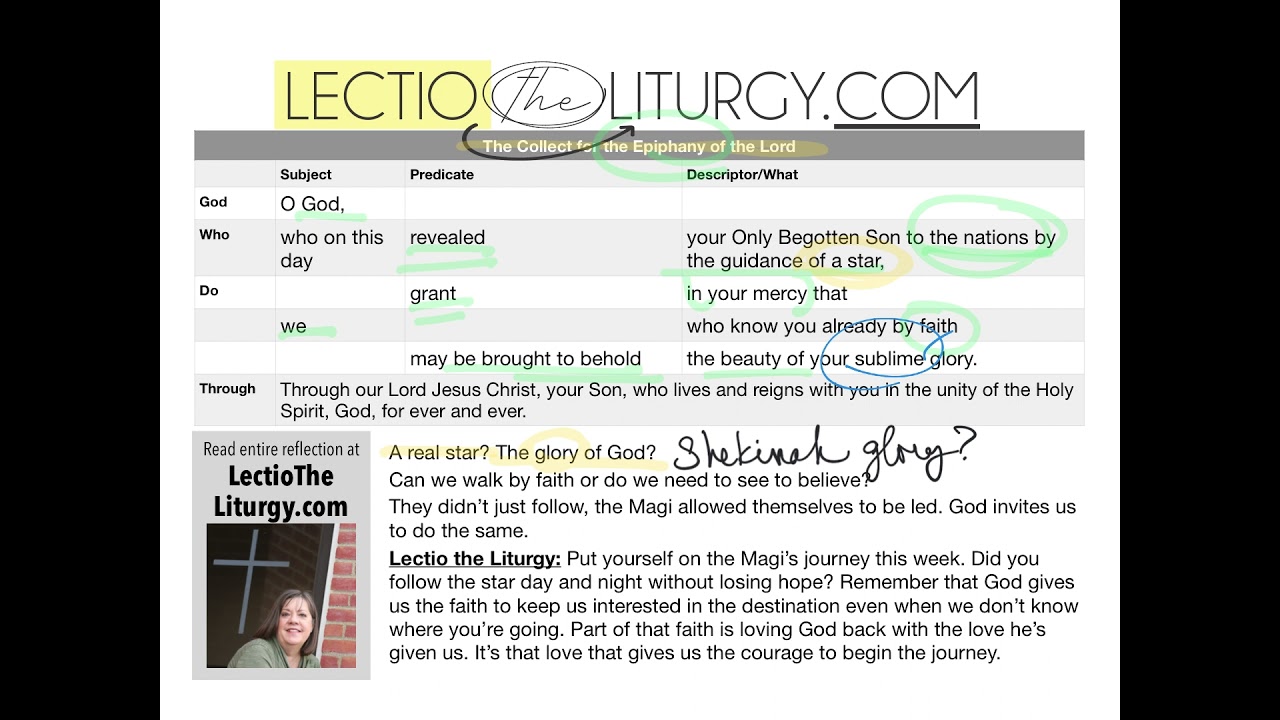 Thanks for joining me as we Lectio the Liturgy with the Collect for the Epiphany of the Lord.

O God, who on this day revealed your Only Begotten Son to the nations by the guidance of a star, grant in your mercy that we, who know you already by faith, may be brought to behold the beauty of your sublime glory. Through our Lord Jesus Christ, your Son, who lives and reigns with you in the unity of the Holy Spirit, God, for ever and ever.

Epiphany. It means revelation, appearance, or manifestation of a king. There were numerous epiphanies in scripture. Jesus was revealed as God at his baptism. Turning water into wine at Cana also was an epiphany.

The epiphany we celebrate this weekend is the first revelation of the newborn Son of God. Through the journey of the Magi, Jesus was revealed as God to the nations, which included the Gentiles.

I’ve been thinking about the journey of the wise men. Was the light they followed really a star like we see a star? It could be that the light was the glory of God, or a Shekinah glory, a light that is the symbol of God’s presence. Scripture describes this light as a cloud, full of the brightness of the Lord’s glory. It is the glory-light described as the light in the Temple in the Old Testament. It is described at Jesus’ Baptism, and it’s described as the same at the Ascension. The Collect tells us that God’s glory is “sublime,” or inspires awe because of elevated beauty, nobility, or grandeur. It is fitting that it would be the light that led the Magi to the baby Jesus and it would have been amazing to have seen it.

As I thought about what it would be like to follow a star, another realization set in. I wondered if the wise men followed, or if they allowed themselves to be led.

The Magi could have felt the same way. Did they jump on board or did they have to weigh out what the consequences might be? What if their journey was a waste of time? I wonder if they ever got tired of following or what could have captivated their imaginations so much that they stayed on their course.

Second Corinthians 5:7 reminds us that we walk by faith and not by sight. It’s this walk, the "walk in faith," that leads us to behold another glory. Not just the glory of the baby in a manger, but the beauty of the sublime glory of an intimate relationship with God.

In his mercy, God is inviting us to a journey. Just like the Magi, he wants to lead us to behold his glory, too. He wants us to contemplate, to gaze on his awe-inspiring beautiful glory, just like the Magi adored the infant Jesus.

All we need to do is allow ourselves to be led.

Lectio the Liturgy: Put yourself on the Magi’s journey this week. Did you follow the star day and night without losing hope? Remember that God gives us the faith to keep us interested in in the destination even when we don’t know where we’re going. Part of that faith is loving God back with the love he’s given us. It’s that love that gives us the courage to begin the journey.