Prayer over the Offering - Christmas Mass during the Day 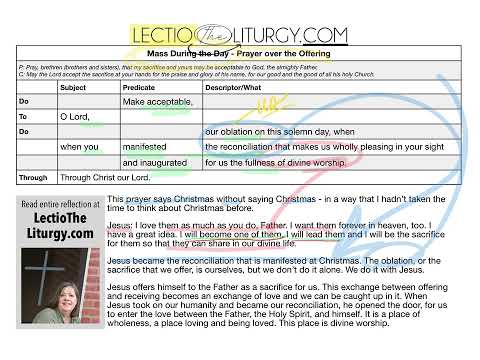 This week we Lectio the Liturgy with the Prayer over the Offering for Christmas Mass During the Day. In the Mass, this prayer is placed after we take the offering, but the collection isn’t the offering. We are.

Make acceptable, O Lord, our oblation on this solemn day, when you manifested the reconciliation that makes us wholly pleasing in your sight and inaugurated for us the fullness of divine worship. Through Christ our Lord.

There was just something about this prayer. It says Christmas without saying Christmas. It says it in a way that I hadn’t taken the time to think about Christmas before.

I remember hearing a story about a man whose family would faithfully go to church every Sunday. Every week he would refuse to go with them. One spring Sunday morning, his family again drove down the lane, on their way to church, while he politely declined giving them the reasons why he needed to stay home. He noticed that the sky had grown dark and a storm was approaching. He also saw that the ducklings were outside the barn with no way to get back in. He went out, opened the door, and tried to persuade the ducklings to go into the barn, but they just scattered all the more. “If only I could become one of them,” he thought. “Then they would know me and I could lead them to safety.” It wasn’t but a second before the weight of his words sunk into his mind.

I also imagined a conversation in heaven may have gone something like this:
Father God: I love them and want them all with me.
Jesus: I love them as much as you do, Father. I want them forever in heaven, too. I have a great idea. I will become one of them. I will lead them and I will be the sacrifice for them so that they can share in our divine life.

While it may not have been in those words exactly, it is what happened. Jesus became the reconciliation that is manifested at Christmas. The oblation, or the sacrifice that we offer, is ourselves, but we don’t do it alone. We do it with Jesus.

Jesus, who is fully God, becomes fully human. Jesus offers himself to the Father as a sacrifice for us. It is a gift. There is no other way for us to be wholly pleasing to the Father. This exchange between Jesus’ offering and the Father’s receiving becomes an exchange of love and we can be caught up in it. When Jesus took on our humanity and became our reconciliation, he inaugurated, or he opened the door, for us to enter the love between the Father, the Holy Spirit, and himself. It is a place of wholeness, a place loving and being loved. This place is divine worship.

Actually, the Prayer over the Offerings is an echo of the Collect from this same Mass. The last part of this prayer is prayed by the priest at every mass:
O God, who wonderfully created the dignity of human nature and still more wonderfully restored it, grant, we pray, that we may share in the divinity of Christ, who humbled himself to share in our humanity.

Once again, the prayers in my favorite prayer book, the Roman Missal, have the perfect words.

Thanks for praying with me,
Julie