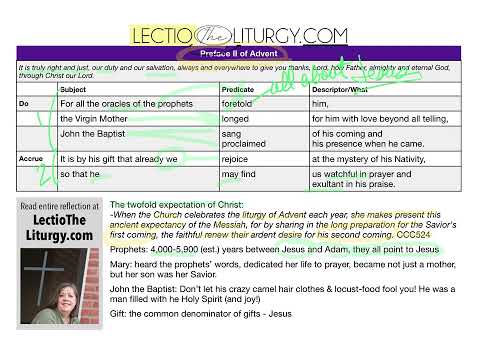 For all the oracles of the prophets foretold him, the Virgin Mother longed for him with love beyond all telling, John the Baptist sang of his coming and proclaimed his presence when he came.
It is by his gift that already we rejoice at the mystery of his Nativity, so that he may find us watchful in prayer and exultant in his praise.

The twofold expectation of Christ are his first and second coming. This can be found in the Catechism of the Catholic Church (524), "When the Church celebrates the liturgy of Advent each year, she makes present this ancient expectancy of the Messiah, for by sharing in the long preparation for the Savior's first coming, the faithful renew their ardent desire for his second coming.”

The first expectation of Christ is described in the first part of the prayer.

The oracles of the prophets foretold him. As you read the Old Testament prophets, keep this in mind: who they’re writing about is Jesus. Every Old Testament prophet, right up to the last prophet, John the Baptist, pointed to the Messiah. A Savior was first promised in the book of Genesis, and it was a long time until the birth of Jesus. A long time. I’ve seen estimates of timelines from Adam to Jesus that range from 4,000 years to 5,900 years. I wonder how they remained faithful. Oh yes, they sinned, but they also repented. They went astray, but they also returned. They got to actually see mighty works of God. God always provided a leader for his people. The number of people varied, from an entire nation to a handful, and yet there was always someone keeping watch.

The Virgin Mother longed for him. Tradition tells us that Mary had chosen to not marry, to remain single, as a woman of prayer, one who would pray for the coming of the Messiah. Growing up, she had heard the words of the prophets, she loved God her whole life, and she, too, waited and prayed. Imagine the thoughts in her mind when the child she would deliver was not only just be her son, but he would also be her Savior. Out of her deep love for God, she bore the Christ child for the world; this could be our take away from the prayer as well - to love God and to bring Christ to a weary world.

John the Baptist sang of His coming and proclaimed His presence. I’ve had to reform my opinion of John. I admit it. It, it’s hard to imagine a man who lived in the wilderness, wore garments of camel's hair and a leather girdle, and who ate locusts and wild honey, as a man who would sing. Let’s face it, a scruffy character like that would mostly be ignored in today’s society. But there was something else about John. He was filled with joy and joy attracts. It’s easy to imagine the somberness of his imprisonment and beheading, but John was a man filled with the Holy Spirit. He proclaimed the presence of God among them and I know that I like being around people who bring that presence in the world today.

In spending time with the second part of the prayer, I found myself in what could be considered time travel, which is exactly what Advent, Lent, and even the prayers of the Mass are. At the Last Supper, Jesus told his disciples to do this “in memory of me.” The Jewish people then, and still today, remember in a way we don’t often experience. Their type of remembering isn’t just telling the story, it becomes a ritual. It’s a memory they live.

Advent is one of those rituals, a living memory. Jesus was born over 2,000 years ago, but we don’t just celebrate Advent as a season. It is a time for us to put ourselves there, in Bethlehem, in that place in time. It is there where we find his gift.

There are lots of things to consider as being the gift in this prayer. We have the gift of forgiveness, or mercy, or everlasting life, but there is one common denominator in all of those gifts and it is the gift that Christ was born.&nbsp;

To be watchful in prayer and exultant in his praise is the dependent phrase, which means that being watchful and exultant are things we can’t do on our own. They only come when we rejoice at our Lord’s Nativity. If we truly make room in our heart for that Gift of God, we will be in prayer, just like Mary, watching and waiting for the second expectation of Christ, and we will be boastful in our praise of God. The Lord has done great things for us, we should be filled with joy!

This week we enter the home stretch of Advent. May our celebration of his first coming help us prepare with expectation and joy for his second coming.

Thanks for praying with me,
Julie